This toy has a chance to drop from Warleader Tome in Nagrand (Draenor). It took me around 6 goes to get this to drop at level 110, I tried several times at level 100 but was seriously given a beating so I waited and came back later on.

When you use this toy it will place a disguise on you that will make you appear to be a Warsong Orc, it has a 2-hour cooldown.

Warleader Tome and his pack will spawn on the south road exiting Anguish Point ( Cords 82.60) and will travel clockwise on the path I have marked on the map until returning to Anguish point via the north entrance and despawning. His average spawn time is 15 – 20 minutes. 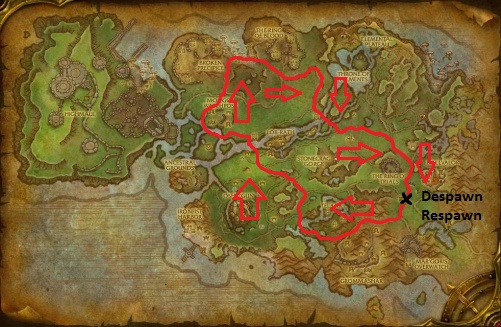 This can be a tough fight at level 100. He is surrounded by his entourage usually around 12 of them, all with around 300k hp but not elite, Warleader Tome is an elite and has around 3261k hp. Now while he is with these guys they each have a buff – Strength of the Warsong – This increases all of their damage by 20% so if all 12 are there each of them will have a 260% damage increase buff.

The best strategy is to separate the smaller ones from Warleader Tome and kill them off. Be sure and start this early into the patrol so you have time to kill all of his pack and him otherwise Warleader Tome will finish the patrol and despawn when he reaches Anguish Point and all your work will be for nothing. The pack will come away from him usually 4 at a time so you will need time to do 4 pulls in total.

In saying all of this at 110 this fight is super simple. I do personally like to put a call out over the general chat to see if anyone else wants to join me in the kill as it is personal loot for all party members. You only have a chance to loot this toy on your first kill so farming him after then would be a waste of your time.